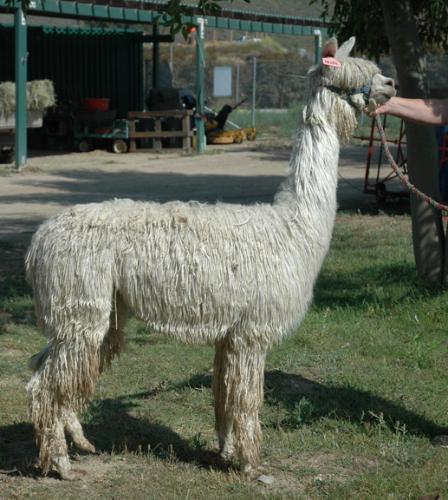 Sire: NGG ACCOYO APACHE II
| 31785600 | Beige |
Accoyo Apache II is virtually a legend in the suri world. Some would say he is "the Best" suri herdsire in the country. Certainly he has a sterling reputation. For parents he boasts 2 of the finest suris that were ever imported into the US, both owned by Nola Graham of NGG Alpacas: Pperuvian Uribe--the first colored full Accoyo suri in the US-- and Ppperuvian Dulcinea--a dam so fine that Nola paid a premium for her. Later, Greg Mecklam of Pacific Crest bought Apache, and has taken him to his current status of fame.

Even at age 11, Apache was big-boned and imposing in the pasture. He knows his job, and the other guys all give him his place. His fleece was still magnificent, even after so many shearings. His density and luster are immediately evident. His prepotence as a herdsire is obvious in his crias. Even prior to owning him, we can truly say that some of our best suris have been Apache offspring. His show record speaks volumes: 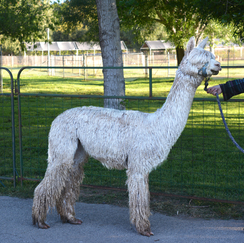 Alope's sire is none other than the wonderful NGG Accoyo Apache II. He has produced quality on quality in our herd and others. A son of the original colored Accoyo import, Uribe, Apache has not disappointed. He passes fineness, lock, luster, bone, and a sensible disposition--nearly perfect!

Alope's dam is AWH Mistral, the daughter of Inca's Luster King and Bluegrass Peruvian Lola, a Baron Lafite daughter. Mistral is a beautiful representative of both parents.

Alope is a fantastic mother, more than ample amounts of milk, Dr. Jana Smith commented she milks like Holstein! All that milk grows big cria!

Alope birthed a stunning 20.4 pound male sired by OTN Peruvian Yukon Sept 2017 - He is dense, big boned, dripping with luster and has that gorgeous Apache color!

We loved Alope's male cria from OTN Peruvian Yukon, we repeated the breeding for a March 2018 cria!